Robosub 2016 has come and gone already. It was a wild ride, and we couldn’t be happier with the way things turned out. Eleven team members flew out to San Diego from across the US, putting their internships and projects on hold for nine days to hack hard, test the bot, and compete at the TRANSDEC.

Our team ended up qualifying for semi-finals. We were able to complete three tasks during the semi-finals round: 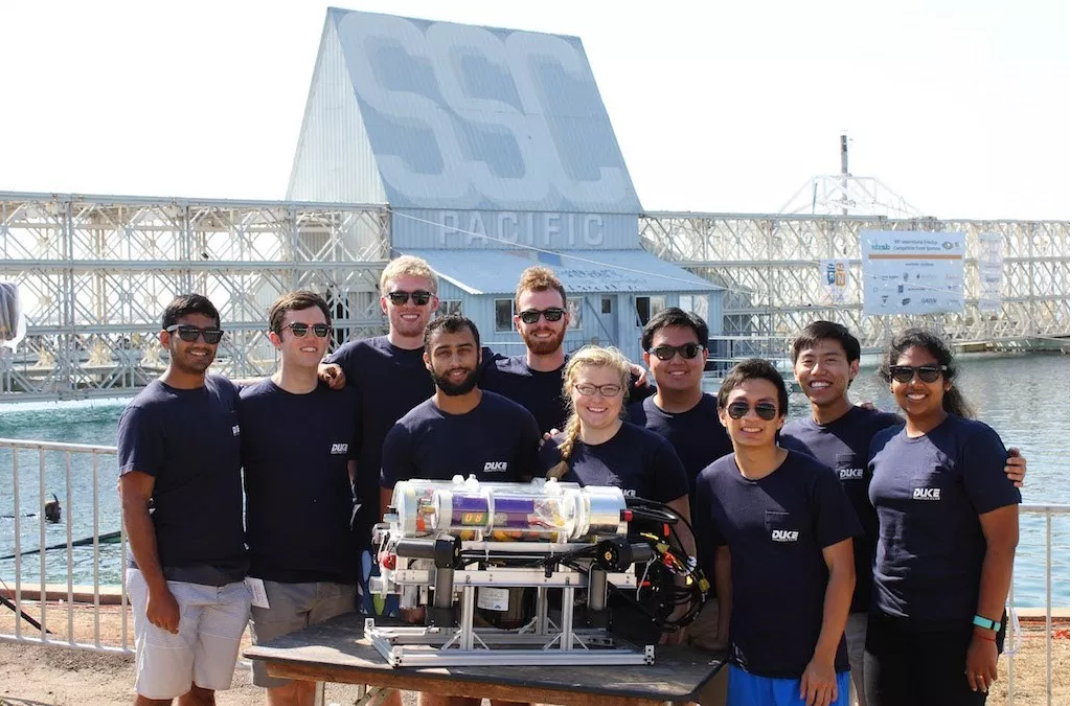 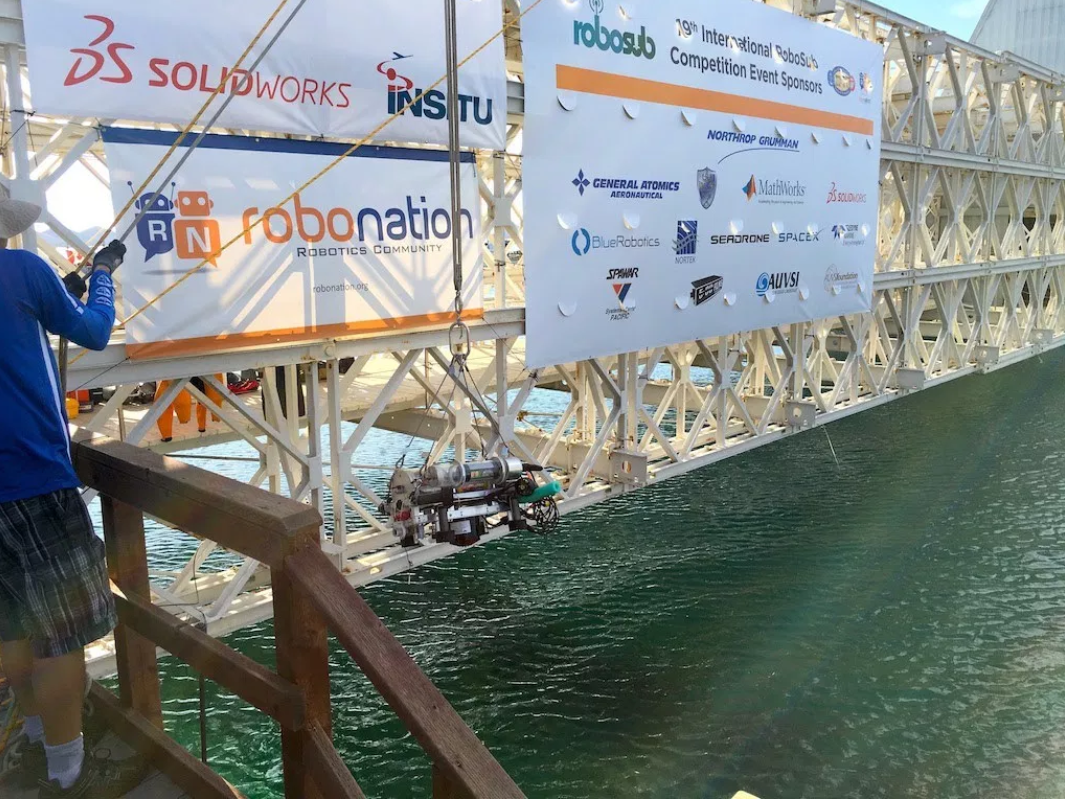 As a first year team, we set very realistic expectations going in: passing the qualifier gate: 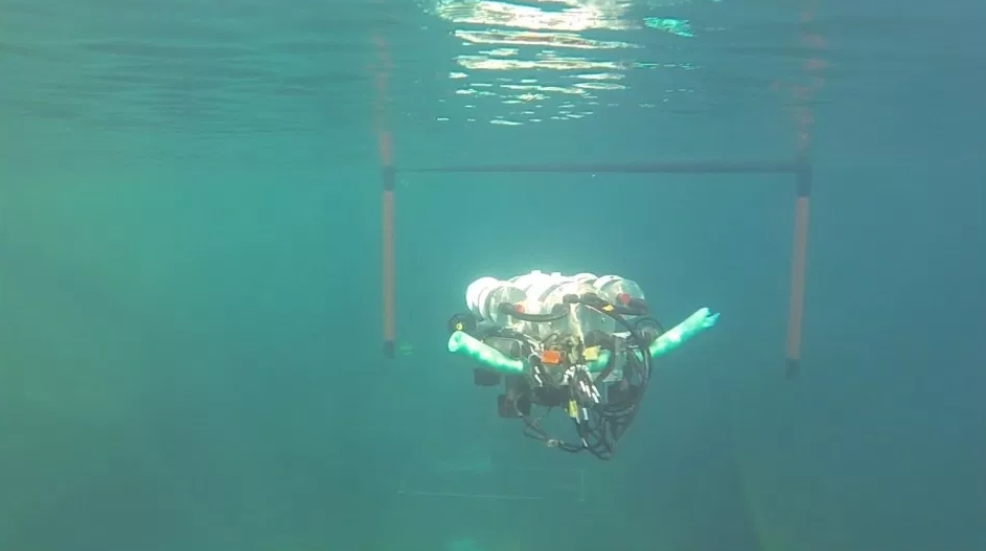 And we did pass it, on the second day. It was an incredible moment (And one that most of the teams at TRANSDEC heard). This did not turn out to be an easy task. We faced numerous severe problems across the board on the bot.

Mechanical: Will Stewart, our mastermind mechanical team leader, designed with reliability in mind from the start. To this day, we have not had a problem with leaking, and this did not change at the competition. Mechanical design was a success. We were slightly over the weight penalty on the first day of semi-finals, but were slightly under (38.4 kg) on the second day after mechanical managed to switch to a lighter battery pod and removed some sensors we weren’t using. 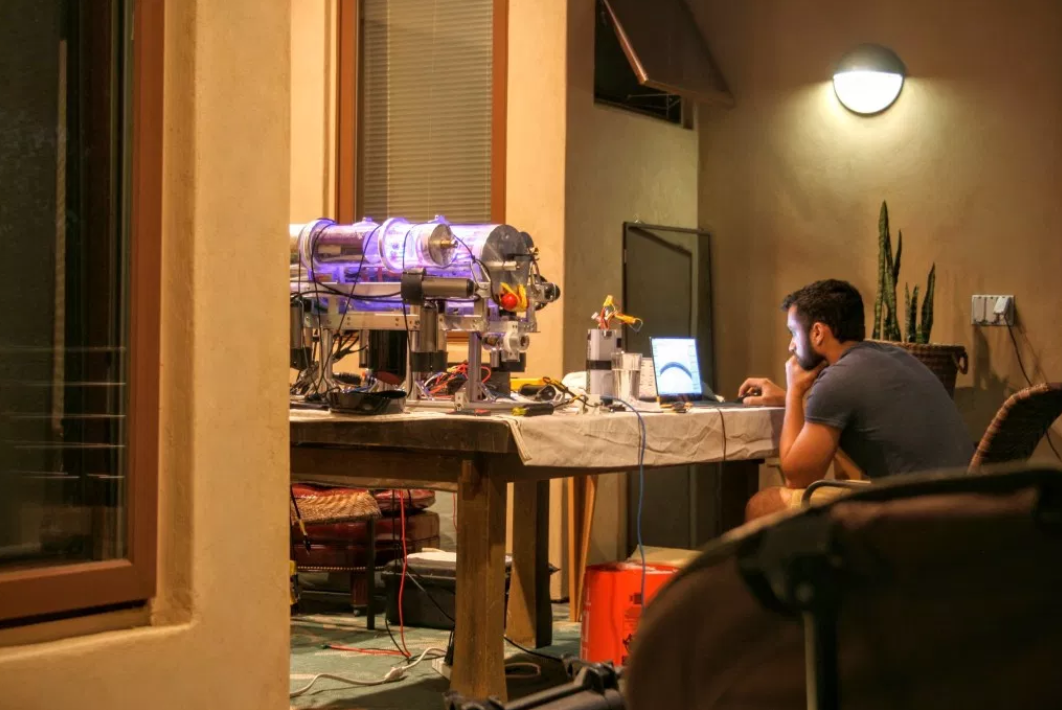 Electrical: We knew that electrical was going to be difficult, but I don’t think anyone appreciated just how many things could possibly fail on our electrical stack. One severe issue we faced was heat buildup from our Sabertooth brushed motor controllers. This was eventually the cause of a small fire that happened while the bot was running the thrusters for over an hour in the test pool. These controllers were thrown in at the last minute to replace underspecc’ed ones, and had to be haphazardly stacked on each other: 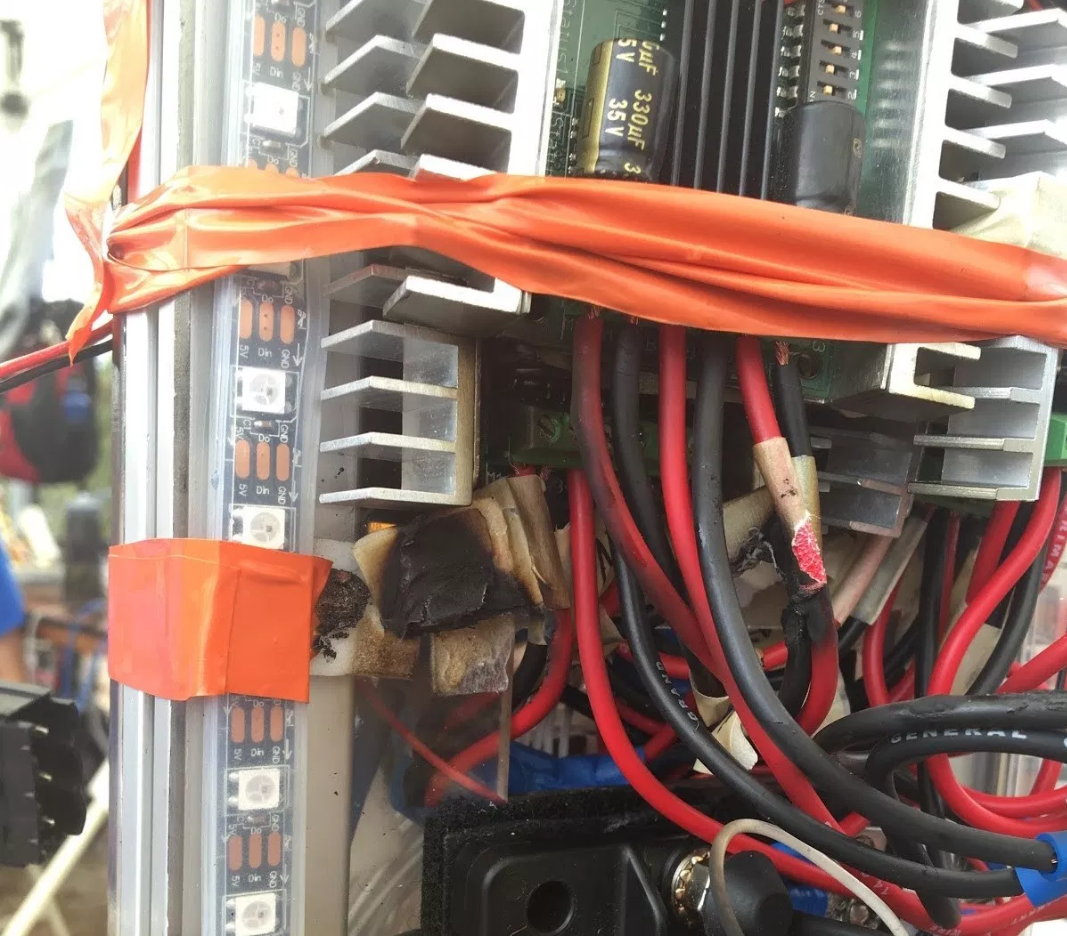 “Fire in the hull”

Computer Science: Our fearless CS leader Austin Mckee saved the day by committing a metric boebot-ton of codebase changes over the last two or three weeks in preparation for competition. He ended up writing us a nice motion planner which allowed us to score the points we did during semi-finals, as well as single-handedly making controls work. 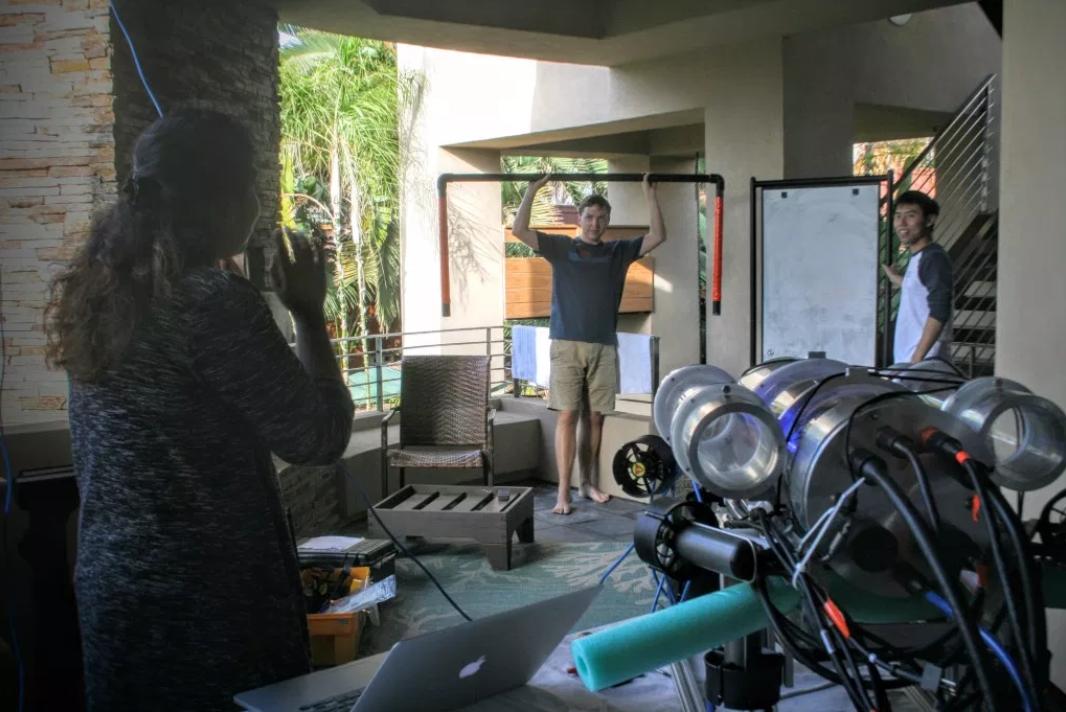 Austin testing CV with a scaled down qualifier gate. Vision doesn’t work well out the water, because there are too many false positives in the environment. 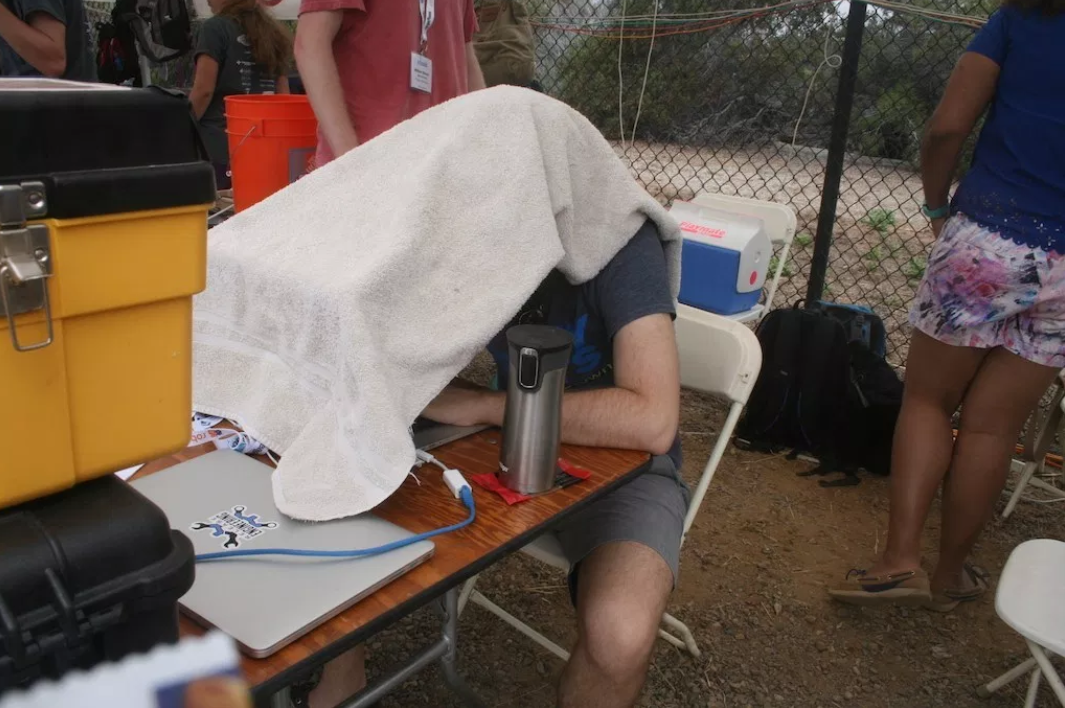 Our “coding cubicles” were not quite as fancy as CUAUV’s. It’s very bright out here. 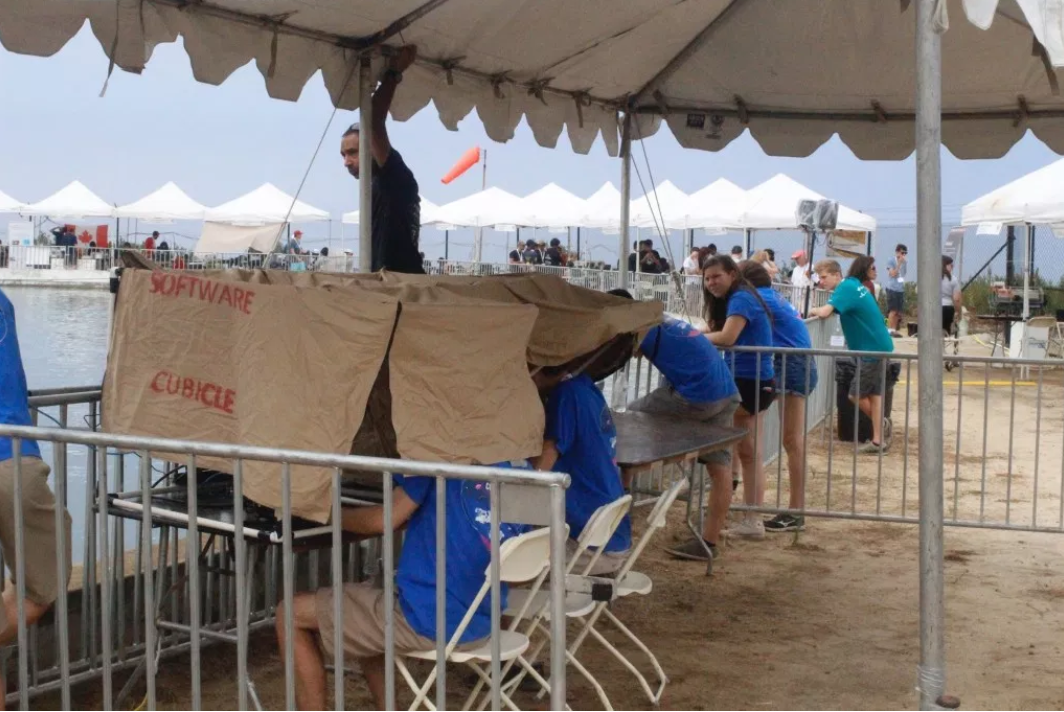 Look at these guys. Brilliant. 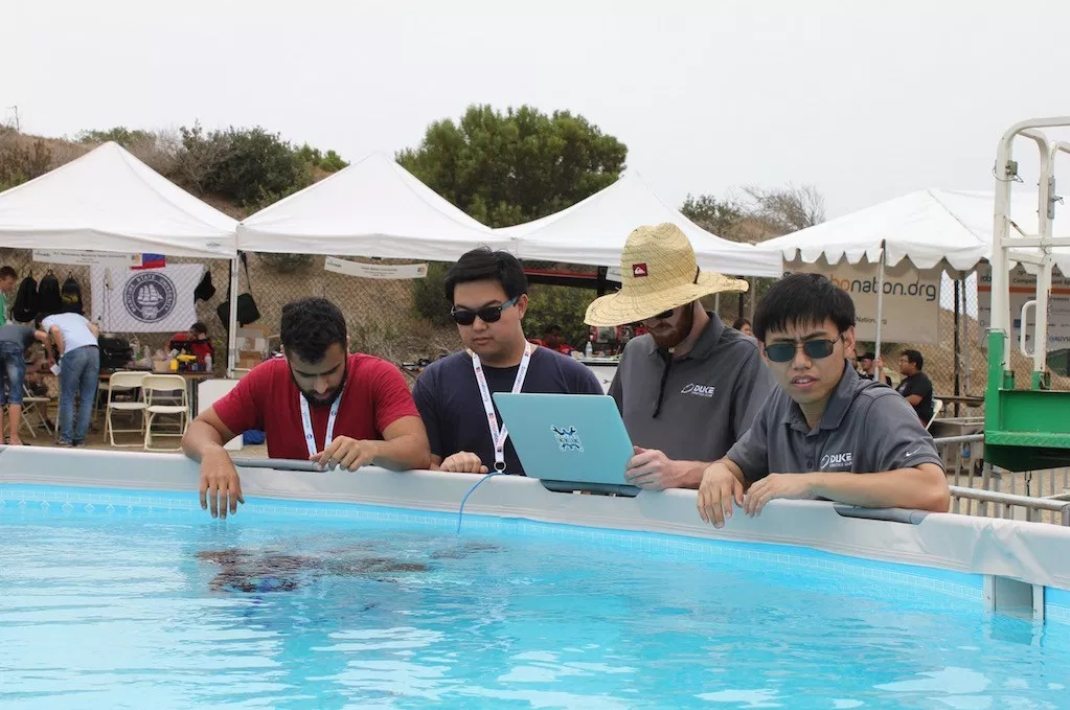 The massive testing pool near our booth. And site of the great 2016 fire. 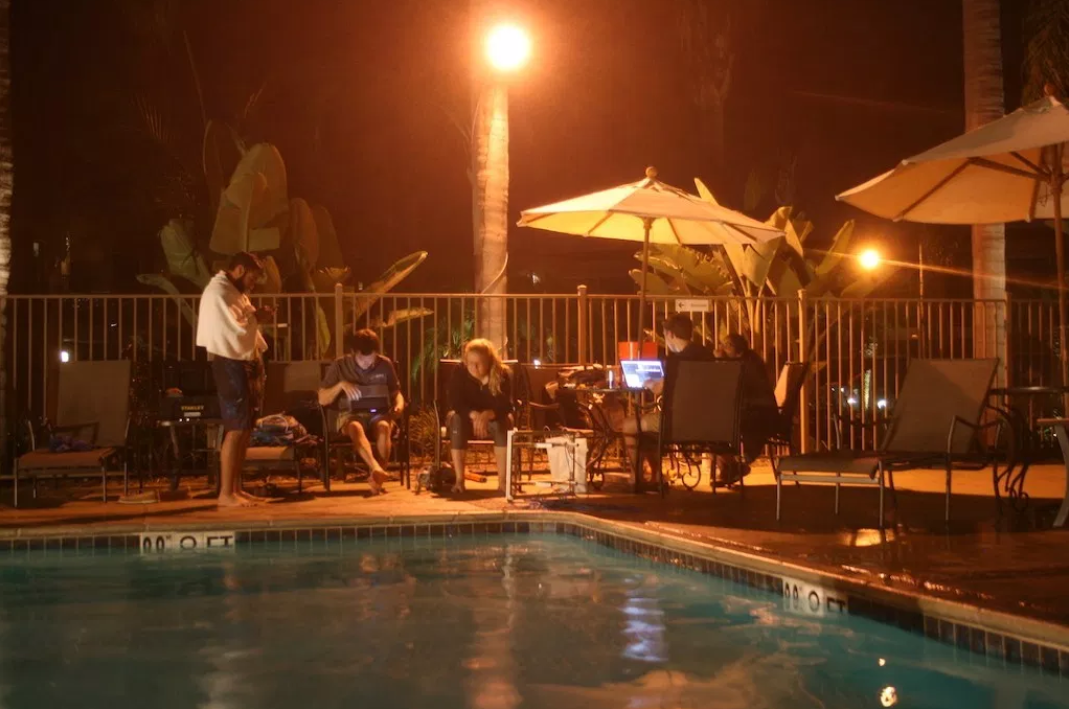 At night, teams moved to a local hotel which allows robots to swim from 10pm – 5am. 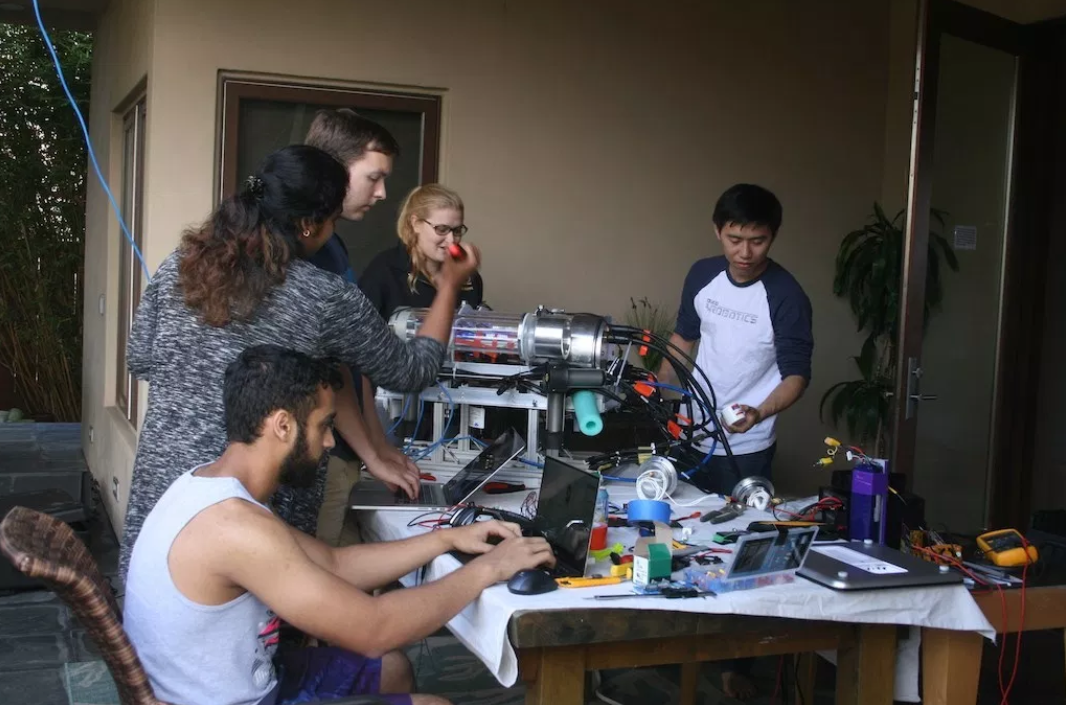 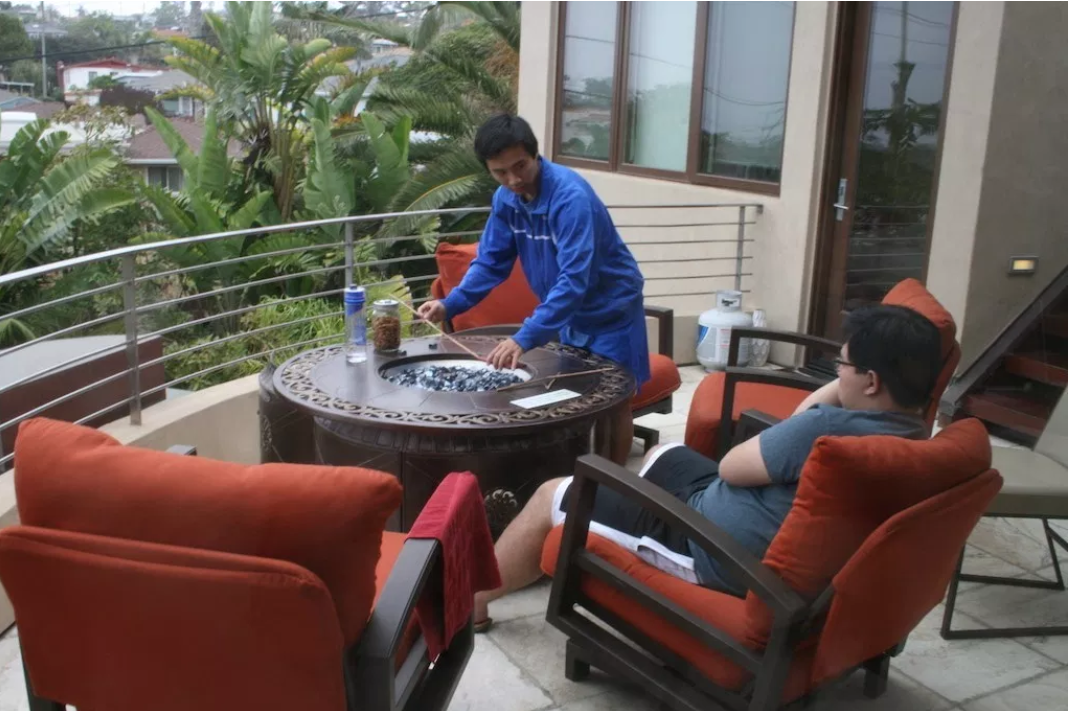 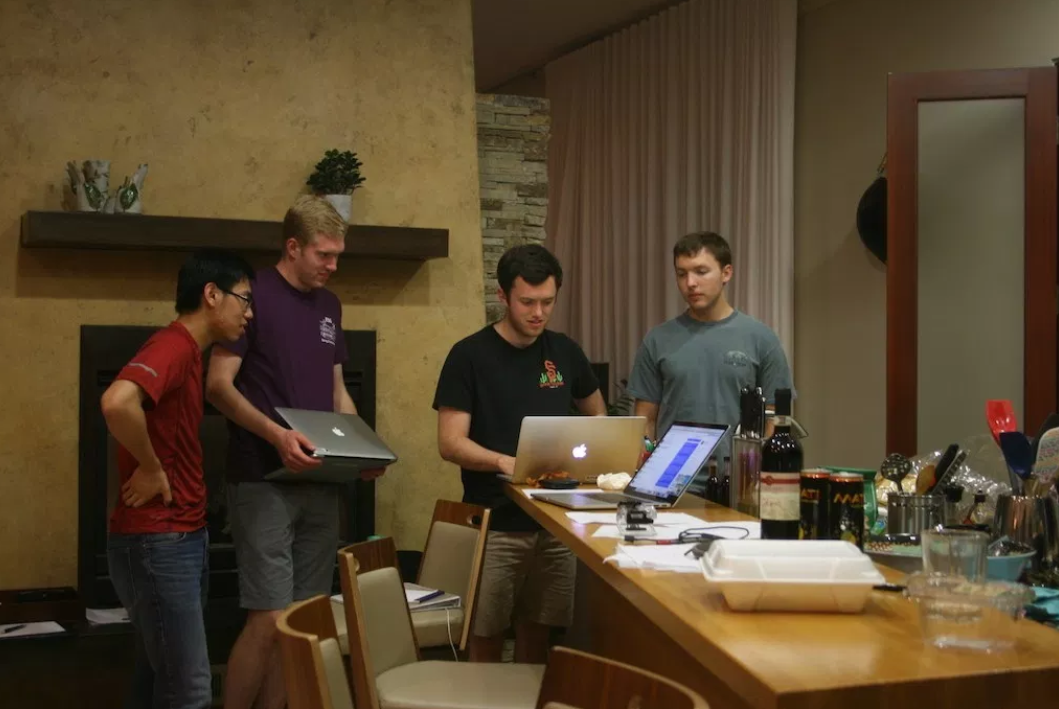 Believe it or not, that guy on the right is called “The GM”. 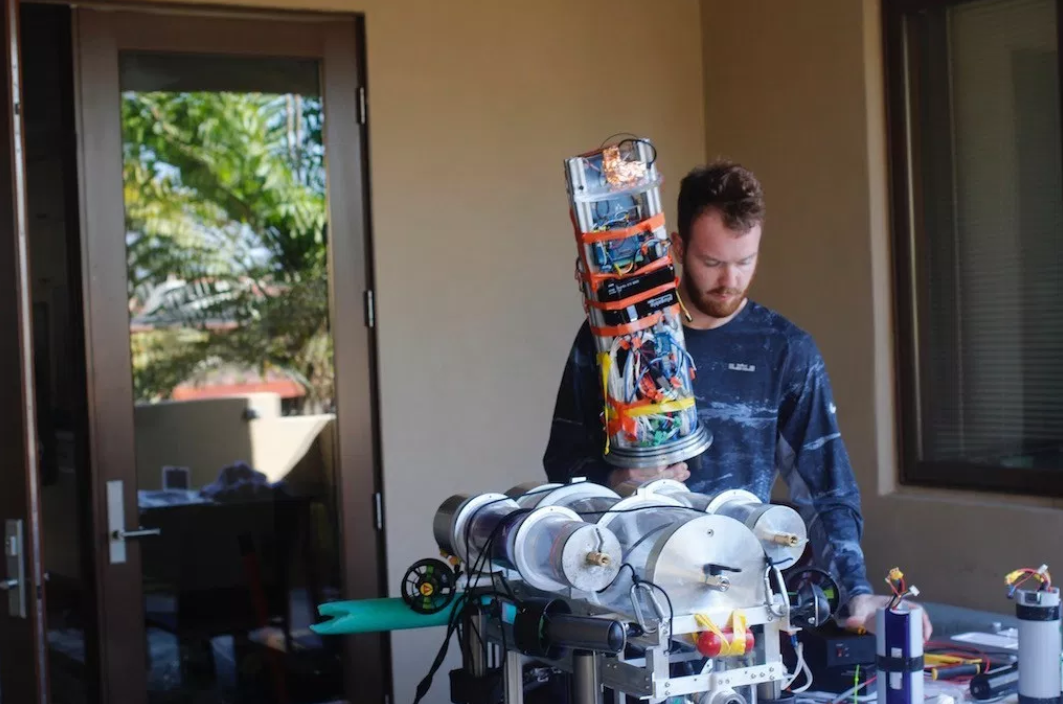 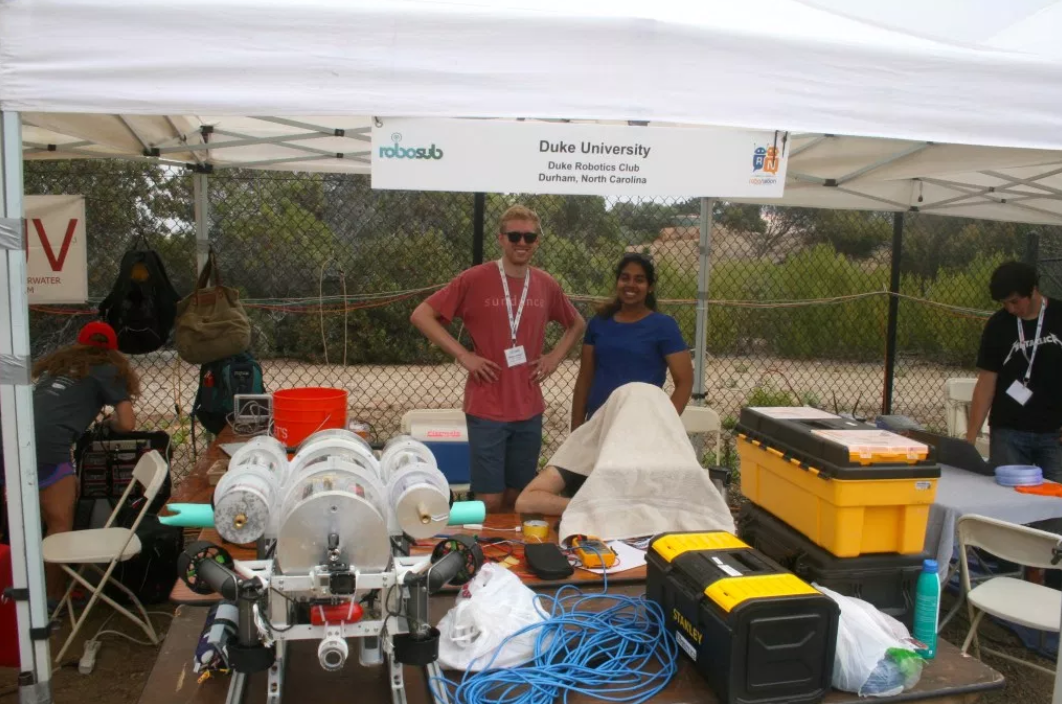 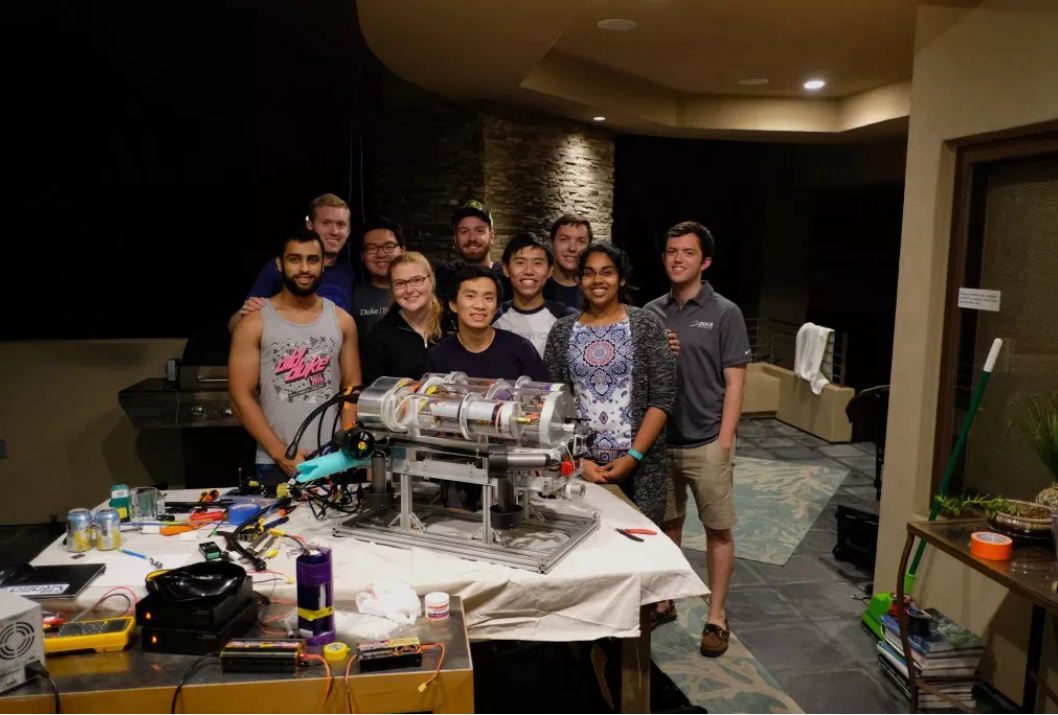 It was our first year, and the biggest thing we came home with is a massive amount of learnings and desire to apply them in the coming year. Here’s to making 2017 a great year!